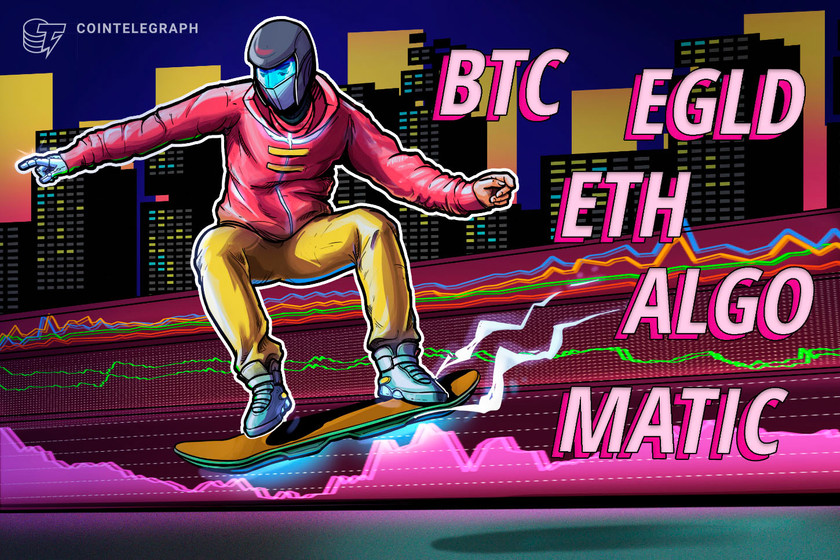 Bitcoin (BTC) and most altcoins sold off on Dec. 4 with massive deleveraging seen in the crypto derivatives markets. Data suggests more than $2.5 billion of crypto liquidations over a 24-hour period.

Some analysts believe that Bitcoin’s recent decline could result in a lengthy phase of consolidation. Decentrader co-founder filbfilb expects Bitcoin to consolidate well into the first quarter of the next year. Lex Moskovski, CIO of Moskovski Capital, also expects “a slow grind up.”

Could Bitcoin hit a bottom within the next few days? Let’s analyze the charts of the top-5 cryptocurrencies that could lead the markets higher.

Bitcoin had taken strong support at the 100-day simple moving average ($54,496) in end-September, making this an important support for the bulls to defend.

However, the bears had other plans. They pulled the price below the 100-day SMA on Dec. 3 which may have triggered several stop losses. That resulted in panic selling and the BTC/USDT pair plunged to $42,000 on Dec. 4. The bulls bought this decline with vigor as seen from the long tail on the day’s candlestick.

The downsloping 20-day exponential moving average ($56,219) and the relative strength index (RSI) near the oversold zone suggest that bears have the upper hand. If the pair continues lower from the current levels, the next stop could be the strong support at $40,000.

Conversely, if the price turns up from the current level, the pair could rise to the 100-day SMA, which may act as a strong hurdle. A break and close above this level will be the first sign that a stronger recovery is possible.

The pair has been trading inside a descending channel pattern. The bears pulled the price below the support line of the channel but bulls purchased this dip and pushed the pair back into the channel.

If bulls successfully defend the support line, the pair could rise to the 20-EMA. This level is again expected to act as a strong resistance. If the price turns down from the 20-EMA, it will signal that sentiment remains negative. That may increase the likelihood of a break below the channel.

If that happens, the pair could drop to the strong support zone at $42,000 to $40,000. Conversely, a break and close above the 20-EMA will be the first sign that sellers may be losing their grip. The pair could then rise to the resistance line of the channel.

Ether (ETH) has been range-bound between $4,868 and $3,900 for the past few days. Although bears pulled the price below the range on Dec. 4, they could not sustain the lower levels. The bulls bought this dip aggressively as seen from the long tail on the day’s candlestick.

If bulls sustain the price above $3,900, the ETH/USDT pair could rise to the 20-day EMA ($4,326). A break and close above this level could clear the path for a possible rally to the all-time high at $4,868. The bulls will have to overcome this barrier to signal the resumption of the uptrend.

Contrary to this assumption, if the price turns down from the current level, the bears will make one more attempt to sink and sustain the pair below $3,900. If they succeed, the pair could plummet to the strong support at $3,400.

The pair’s rebound is facing stiff resistance near the 61.8% Fibonacci retracement level at $4,215.12. The 20-EMA is sloping down and the RSI is in the negative territory, indicating a minor advantage to the bears.

Conversely, if bulls drive the price above the moving averages, the pair could rise to $4,654.88 and then challenge the all-time high.

Polygon (MATIC) has been trading inside an ascending channel pattern for the past several days. The bulls pushed the price above the resistance line of the channel on Dec. 3 but could not sustain the higher levels. This may have prompted profit-booking on Dec. 4.

The MATIC/USDT pair plunged to the 100-day SMA ($1.54) but buyers stepped in and bought this dip. However, the long wick on today’s candlestick indicates that bears are selling near the resistance line.

The 20-day EMA ($1.85) is sloping up and the RSI is in the positive zone, signaling advantage to buyers. If the current rebound sustains, the bulls will again attempt to thrust the price above the resistance line.

The pair’s recovery is facing selling at the 78.6% Fibonacci retracement level at $2.21. If bears sink the price below the 20-EMA, the pair could decline to the 50-SMA and then to the 100-SMA. A break below this support could open the doors for a decline to $1.54.

Algorand (ALGO) plunged below the critical support at $1.50 on Dec. 4 but the bulls bought the dip aggressively as seen from the long tail on the candlestick. The bulls will now try to push the price above the moving averages.

If they do that, the ALGO/USDT pair could rise to the resistance line. This is an important level for the bears to defend because a break above it could invalidate the descending triangle pattern. The pair could then rise to $2.36 and later to $2.55.

Contrary to this assumption, if the price turns down from the moving averages, it will indicate that bears are selling on rallies. The pair could then retest the support at $1.50. A break and close below this level will complete the bearish setup. The pair could then drop to $0.80.

The pair has been trading between $1.60 and $2 for some time. The bears pulled the price below $1.60 but could not sustain the lower levels. This suggests aggressive buying on dips. The bulls have pushed the price back into the range.

The sharp rally in Elrond (EGLD) from $287 on Nov. 17 to the all-time high at $544.25 on Nov. 31 pushed the RSI deep into the overbought zone. Vertical rallies are generally followed by waterfall declines and that is what happened in the past few days.

The EGLD/USDT pair turned down from the all-time high and plunged to $224.62 on Dec. 4, completing a 100% retracement of the latest leg of the rally.

A minor positive is that bulls purchased the lows on Dec. 4 as seen from the long tail on the day’s candlestick. The buyers are currently attempting to defend the uptrend line and push the price back above the 50-day SMA ($324).

This indicates that sentiment remains negative and traders are selling on rallies. If the price sustains below the uptrend line, the next stop could be $224.62.

On the contrary, if the price turns up from the current level and breaks above the 20-EMA, it will indicate that the bears may be losing their grip. The pair could then start a recovery, which may reach the 50-SMA. A break and close above this resistance could clear the path for a possible rally to the $425 to $440 resistance zone.

The views and opinions expressed here are solely those of the author and do not necessarily reflect the views of Cointelegraph. Every investment and trading move involves risk, you should conduct your own research when making a decision.

South Korean Police Investigate Who Leaked the Crypto Tax Bill
$6M Worth of Tether on the Bitcoin Cash Chain Highlights the Benefits of SLP Tokens
Bamboozled: Gavin Andresen Says He Could Have Been Fooled by Craig Wright, BSV Supporters Speak Out
IMCoin (IMC) Flies High
Bitcoin Price Set To Explode Once It Breaks $13,000: Prop Trader
Was the first reply to the Bitcoin White Paper Satoshi himself? In-depth theory